The Sacred Wells of Tara

The Hill of Tara as we see her today hides a great many mysteries, some mystical and some of a more concrete nature.  The subject of her wells is a mixture of both.  Undeniably there are a series of underground water channels, the proof of which is in the out pouring of her wells, however, both the exact number and location of these wells is only now being rediscovered. One of the earliest type of documents, ‘the dindschenchas’ ( a collection of 10th century prose/poetry which mentions topographical features and was translated by Petrie in 1839) names some of the wells, but the descriptions given do not fully tally with later medieval commentators.  Petrie produced an idealised map of the hill which has been tinkered with over the intervening years and has caused some confusion.  What we do know for certain is that at present out of a possible six* wells, three are flowing above ground, the others whilst still there have been piped into near by drains.

Starting in the north east and proceeding in a clockwise/sun wise direction we have the wells known as Adlaic and Diadlaic (pronounced add-lick and dye-add-lick).  These two wells were in use up until relatively recently.  Located less than twenty feet apart in the field on the right hand side of the present approach road behind the green farm buildings, close to an ESB pole.  They were filled in for ‘land improvement’, but in the proper light conditions the ghost like outlines of two armchair hollows can be seen with the eye of faith.  The name Adlaic seems to mean pleasant, Diadlaic its opposite.  This is not as one might quickly assume to do with the quality or character of their waters, but with the spirits or energies associated with the wells.  Perhaps it would be more appropriate to consider them as the present day Yin and Yang. 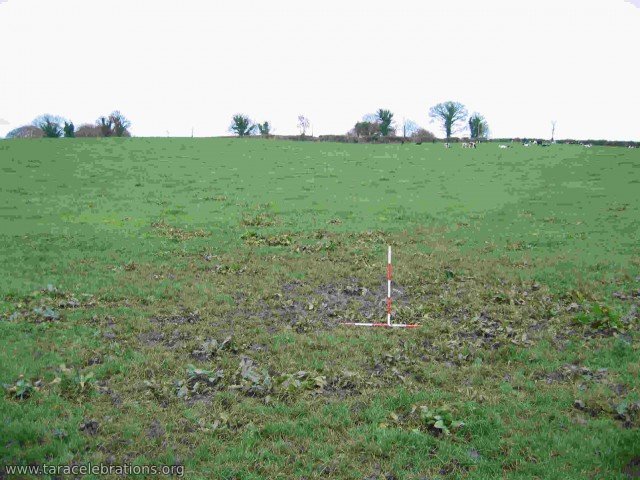 Following the sun we next encounter a well with many names. The dindschenchas describe him thus:

‘eastward from the Rath of the Kings (that is the truth of it) is the Well of the numbering of the clans, which is called by the three names; Liaig Dail Duib Duirb, (the well of the dark eye), Tuath Linde (the physician) and Tipra bo Finne (well of the fair cow), three names to designate it, to make known the well of Temair’.

He has also been referred to as caprach Cormac and today he is commonly called St. Patrick’s Well. This well fell into disuse around the turn of the 18th century but used to supply the village with his water. Restoration in 2003 under the friends of Tara and Slaine has restored the well which has received a Pride of Place environmental award from the council and an an taisce award.

St Patrick's well, Tuath Linde - Well of the Numbering of the Clans, 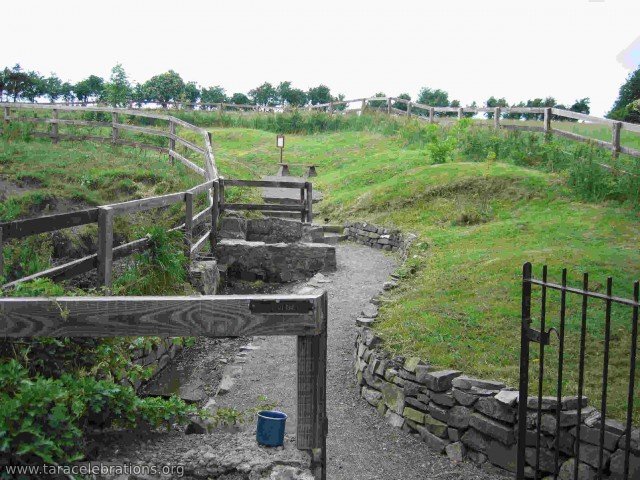 In the olden days the stones in the wells were white washed on a yearly basis to kill germs. Hence the pearly one. However, Michael Slavin has recently pointed out that stones left in the well are coated in some sort of calcium deposit which gives them a white pearly colour. Certainly a better reason for the name. This well still flows but is currently choked with silt from years of neglect. One of the senior residents recalls cleaning out the well about fifty years ago and commented on the abundance of firm bedrock along the stream channel. He recalls the travellers baptizing a child in her water around the same time period.

The next well we encounter on our journey is called ‘Nemnach, the pearly one’. This rises in the same field as Raith Loegaire and the out flow forms the river Nith which reputedly turned the first mill in Ireland.   Strangely this idea of a mill has similarity with many world cultures such as the Norse, Mayan, Maori, Japanese, Cherokee and Egyptian civilisations where the mill stone represents the axis of the world about which all rotates. Tara is seen as the centre of the mythological Ireland about which the other kingdoms rotated, hence the Irish name for Meath – an Mhi – the middle.

Nemnach and the river Nith 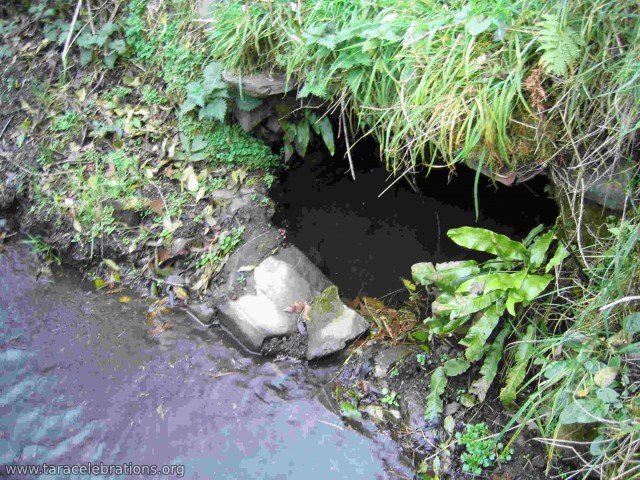 Another well of note is refered to as the Pinnacle. Very little is known about this well and it has been destroyed in the last few years by agricultural improvements.  The source is pictured below but the water flowed underground in a stone lined chanel emmerging in the near by drain under a big flat slab. (Much in the same way as Loeg has been channeled)

The Pinnacle well as named by Raylene Brady, now destroyed (at least it appears in the picture) 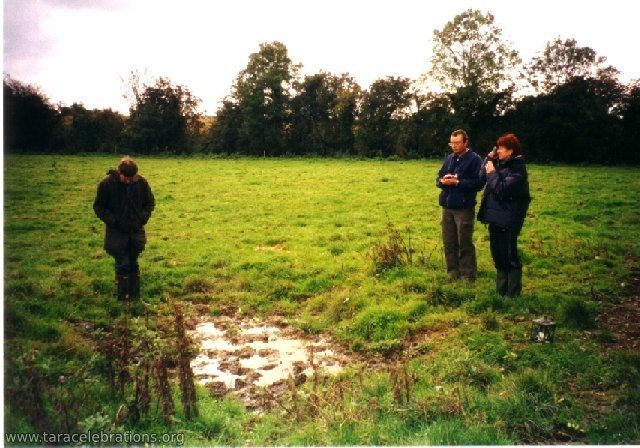 Moving to the western side of the hill brings us to Laeg or Loeg – the calf well, to be found in the field called an fodeen – the long one.
‘another spring (mighty force) which flows south-west from Temair; Calf is its name, though it never sucked a cow; Cormac’s Kitchen is on its margin.’
This well is apparently removed from the earthworks on the hill and retains an air of secrecy and quietness. The original well appears to have been piped into the near by drain and the original site can be observed as a slight crescent shaped hollow in the field about twenty feet further north-east. Where she flows into the drain a stone trough is to be found, now buried up to its rim in silt.
McAlister records an interesting local saying about the two wells: – Nitoet a loeg co a boin find – Its calf does not go to the fair cow.
This is very similar to the Dindschenchas account quoted above and most likely refers to the fact that both springs flow in opposite directions, the well of the fair cow flows into the river Gabhra, whilst the well of the calf flows into the river Skane. Both these water courses do however flow into the river Boyne at Dalgan Park where the two water courses are united briefly before entry into the Boyne.
Interestingly the Boyne river takes it name from the cow goddess Boand and one of the Neolithic passage graves on the hill, duma na mBo – mound of the cow, now destroyed, suggests a veneration of the cow at Tara as in other cultures such as Hathor in Egypt. 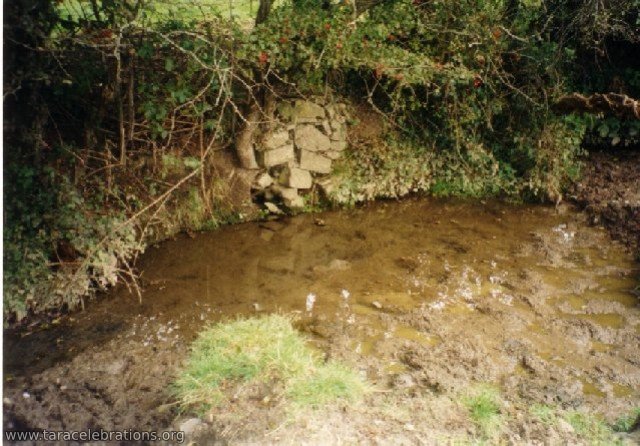 The last well is situated to the north west of Rath Grainne in an arm chair shape depression in the hill.
She seems to be referred to as the The Heroes Well or Tobar Finn – Finn’s well. She used to flow into the bog of Tara, but some time prior to 1798 Lord Tara had her waters piped underground to divert her from feeding the bog.

Tobar Finn (the site of) 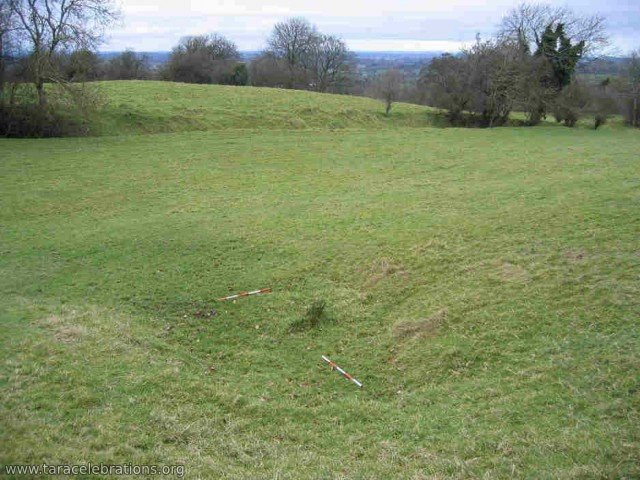 With the locations of the wells now revised and rediscovered I believe it is possible to make a circuit of the wells in pilgrimage fashion.  There can be few better ways to reconnect with our heritage than retracing the footsteps of the ancients at these sacred springs.

Each well has a particular bibration or energetic quality to it and combining the separate waters or merely visiting their abodes seems to be a very holistic activity to perform.  In a future article I hope to explore further the energetic properties of each spring and its subtle effects on the aura.

Note on the text: I have referred to the wells as either masculine or feminine, a well is not an 'it'.  But this is again misleading as the wells have qualities of both and it is not a cut and dry matter.

*The Dindschenchas mention 6 wells when there are in fact known to be more.